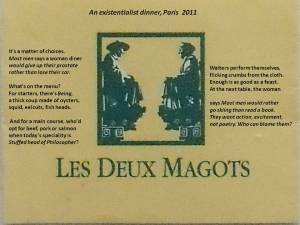 Les Deux Magots is a restaurant in Paris much frequented in the 20th century by artists and writers, among them a group of existentialists led by Jean-Paul Sartre. The existentialists argued that people define themselves by the choices they make and the actions they carry out. Dining in the restaurant in November 2011, it was clear to me that existentialism is still very much alive and kicking.